Alzheimer’s is a disease in which the patients loses their memory. When a patient has Alzheimer’s, they will forget their loved ones and forget basic life skills, such as feeding and dressing themselves and using the toilet. This usually happens to patients who are 65 or older. This also happens more often to women than men. While there is no cure for Alzheimer’s, patient’s symptoms can be treated with medications. 1 in 10 people older than 65 have Alzheimer’s.

Symptoms progress slowly. If you notice any of these symptoms in yourself or a loved one, it’s best to let a doctor know.

While the main diagnosis is through symptoms, there are other tests to rule out other conditions. Blood tests can be ran to rule out conditions that may cause memory loss or confusion such as a vitamin deficiency or a thyroid disorder. Doctors may also run tests to verify mental status. MRIs, PET scans and CT scans can also be used to check for strokes, trauma, or tumors.

In this stage, there is no signs of Alzheimer’s.

In stage 2, there may be small memory problems. They may lose things, but these memory problems are small and they are likely not able be detected by doctors.

In this stage, patients begin to have issues with their daily functions. While they can still function properly, they may have issues properly dressing themselves and dealing with daily confusion.

In the sixth stage, patients are no longer able to be alone. They require constant supervision. In this stage, symptoms such as loss of bladder control, wandering, and extreme loss of memory take place.

In this final stage of Alzheimer’s, patients can no longer communicate. They still may be able to mutter out words. People may also lose their ability to swallow in this stage.

Much like children, elderly people respond well to touch. We all crave touch. When patients receive a massage, it calms and comforts them. It also helps patients interact better with others. According to Holly Cotton, a licensed health care administrator, just the act of a physical touch that isn’t necessarily associated with typical care gives the resident a feeling of calm and centeredness.

Massage can also help by improving sleep and helping to relax the patient. This also can help psychologically for the patient. By circulating your blood, massage therapy can help slow down the progression of memory loss.

Massage therapy can also offer benefit patients in ways such as:

Hand massages may be easier to be accepted by Alzheimer’s patients because holding hands is so familiar. All patients need is a 5-10-minute hand massage. Hand massages help decrease agitation, along with the frequency of agitation happens. A hand massage may also help strengthen the relationship between the patient and their family care partner.

A slow-stroke back massage uses effleurage in a figure-eight formation on both sides of the back, moving the palm of the hand in long, rhythmic, firm strokes. This type of massage helps with sleep, anxiety, agitation, and helps to decrease blood pressure and heart rate.

A Study on the Efficacy of Reflexology in Dementia Patients 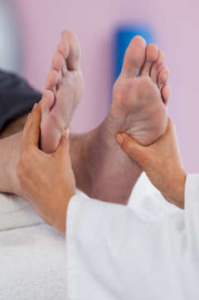 In this 2008 study, 21 residents with mild dementia were split into two categories. One group was given 4 weeks of weekly reflexology treatments and then followed up with four weeks of a control condition. The other group received four weeks of friendly visits followed by 4 weeks of weekly reflexology. The primary result that researchers wanted to achieve was to help lower stress in dementia patients. The results of the study concluded that the control group had no significant improvements, while the reflexology conditioned group showed significant improvements. Patients had a decline in pain and sadness. Due to these findings, it’s important that patient’s families are aware of these benefits as reflexology can be performed anywhere.

2017. What are the Signs of Alzheimer’s Disease? National Institute on Aging.

2018. What are the 7 Stages of Alzheimer’s? Alzheimers.net

Catlin, A. The Role of Massage Therapy in Dementia Care. Massage Today.

McDaniel, R. 2017. Amazing Benefits of Massage for Alzheimer Disease Patients. The Diary of an Alzheimer’s Caregiver.